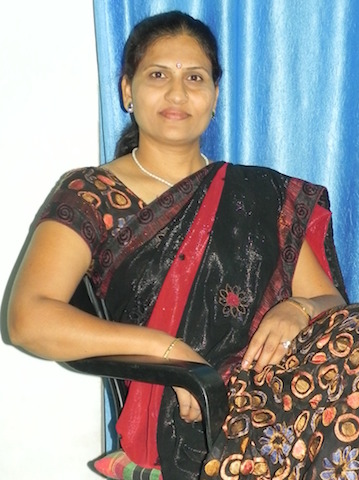 Alka is from the drought- and earthquake-prone Latur district in central India. At 18 she married a police man and had three children. However, he died suddenly within a few years from an alcohol-related illness. His family were very poor and unable to help her, and so Alka, who was illiterate, found herself struggling even to feed herself and her children. She found whatever low paid work she could, usually cleaning and washing up in other peoples’ homes.

However one day Alka happened to come upon a large gathering listening to a Dhamma talk. She was deeply inspired and sought out members of the sangha. When they heard about her situation they gave her work as a cook in the local Bahujan Hitay / Karuna girls’ hostel. Her daughters were also able to live there and so receive an education. Alka began to listen in on the hostel students’ homework classes, and gradually learned to read and write. In time she completed the various educational grades, and eventually gained entry to college and finally onto a Masters degree course!

Alka has now been appointed a co-warden for the hostel with Panchasil, and so is responsible for the well being and education of 70 girls aged 11-18. She is also training to enter the Triratna Buddhist Order.